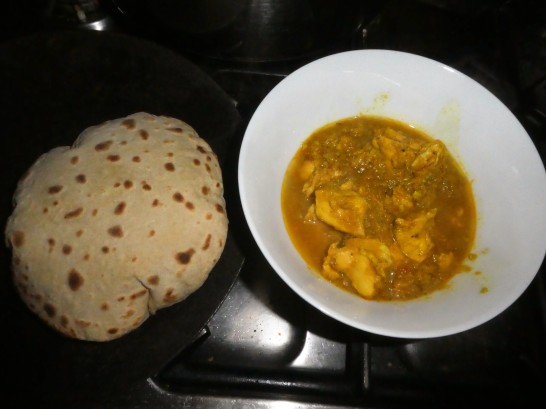 … bowl of homemade chicken curry with a roti hot off the press. When I need a proper, full on curry hit I roll up my sleeves and do it myself because it is rare to get that level of satisfaction anywhere else. Few things come close. Spices in Indian cooking evolved from a health rather than flavour perspective, I believe, and actually increase all round well-being and harmonise functioning and just happen to add great flavour. This is not what you get from food prepared in restaurants, as good as some are.

I don’t do recipes but I feel the secret is to use plenty of fresh onions, garlic and ginger and vine-ripened tomatoes-I would say, guess how much you think you need  and then double the quantity. Add fresh green chillies to taste. I use some whole spices, cumin and cloves and my own home ground garam massalla. The chicken is prepared by a good local butcher ready to go into the sauce. A little salt and turmeric and bob’s your uncle! I make a big batch of the chicken curry because it tastes even better on the second day and also freezes well.

The roti is made from a mix of flour based on my mother’s recipe. It is a good quality wholemeal chapatti flour, supplemented by a little millet flour, cornmeal and gram flour which elevates the roti’s texture beautifully. The roti is rolled out and cooked initially on the hot tava griddle and then finished on the open flame until it is spherical.

A piece of the roti is used to scoop up a piece of chicken and sauce. The combination is divine.
Satisfaction

3 thoughts on “Satisfaction is a …”